By
Ubuntu should be free, and if people want to install proprietary drivers, then it should be made simple and left to them to decide, says Andrew Kutz, a consultant for l o s t c r e a t i o n s. Andrew Kutz is SearchEnterpriseLinux.com's resident Ubuntu guru and an analyst for Burton Group.

In this Q&A, Kutz gives some advice for getting started with Ubuntu, his perspective on the inclusion of proprietary licensing and a tip on troubleshooting during an Ubuntu installation.

Could you offer some tips on getting started with installing Ubuntu on a server?

Andrew Kutz: You can download Ubuntu 6.10 (Edgy Eft) Server from the Ubuntu website. You should select your appropriate mirror. Once you have selected your mirror, you need to find the server install CD. There are 32- and 64-bit versions of this CD. The CD images are available in ISO image format and follow this naming convention, ubuntu-6.10-server-(i386|amd64).iso. Download the ISO image that suits you, and then burn it to a CD.

Burning a CD in Linux is quite easy; you can use the standard shell utility cdrecord. Or, since GNOME and KDE recognize ISO image formats, you should be able to right-click on the file and select "burn to cd" or something of that sort.

You can find a lot of details on installing Ubuntu Server in my series on Linux and virtualization.

How does Ubuntu deal with proprietary licensing for their proprietary drivers? What sets their licensing apart from other Linux distros?

Kutz: As far as I know, nothing really sets Ubuntu apart from other distributions with regards to proprietary drivers; Mr. Shuttleworth simply chose to enable the ATI and nVidia drivers for Feisty as to enable the new version of Ubuntu to compete graphically with OS X and Vista out-of-the-box (through the use of Compiz/Beryl). Canonical is also looking into enabling more proprietary drivers in the future to support network devices such as WinModems, Atheros (Mac) and the Intel 3945 chipset.

However, the decision to include these drivers by default has irked a large majority of the Ubuntu community. My personal opinion is that Ubuntu should be free, and if people want to install these drivers, then it should be their business -- and made easy to do so. For example, if you want to play a media file in Feisty that your system does not have a codec for, Ubuntu prompts you to install the codec. I think this is how support for non-free drivers should be handled. But then again, no one asked me.

During a Ubuntu installation, What can users do when a pre-formatted ext3 drive is given as "/", but still says at the bottom that there is no root "/"? 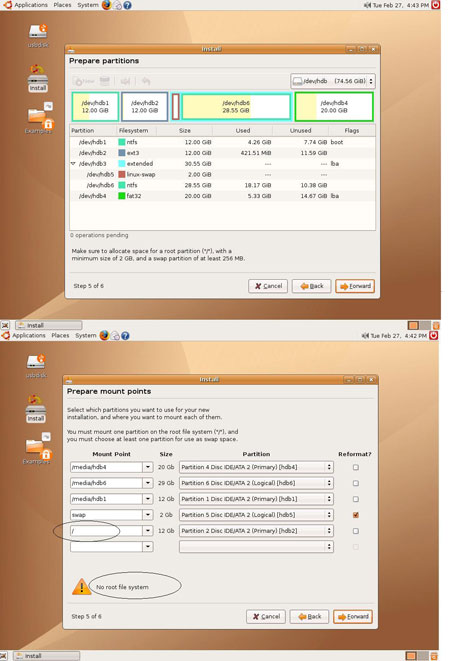 Kutz: If you are positive that there is a valid root file system on /dev/hdb2, then there is a way to bypass gparted's check. Before you run the installer type the following from a terminal:

Find the lines that say:

And change them to say:

Save and exit the file and run the installer. Please thank the good Ubuntu users of this thread. They are the ones who discovered the solution.