Efficiently managing cloud-based enterprise applications has moved up on the priority list for many corporate IT managers. The ability to create virtual appliances on the fly with offerings from Novell, VMware and organizations like TurnKey Linux has only added fuel to the fire. New companies like rPath have been built around the concept of creating, deploying and managing virtual appliances.

For more on virtual appliance management:

Another fairly recent development that has advanced the cause is the Open Virtualization Format (OVF). In August, OVF version 1.1 was adopted as an American National Standards Institute standard. This standard makes it possible to build virtual appliances in a format that can be used by all the major virtualization providers. It also makes deployment to cloud providers like Amazon extremely simple. TurnKey Linux has recently added the ability to deploy and manage any of its free Linux-based appliances to Amazon’s EC2 from a Web-based TurnKey Hub tool.

Getting started
The first thing to do is sign up for the TurnKey Hub beta. As of this writing, the service is currently in private beta, but new accounts are being granted fairly quickly. The biggest reason for managing the beta is to make sure the tool isn’t overloaded with new users until TurnKey is able to scale up to meet the demand. Once you have an account, you’ll have two basic functions available, as shown below.

Both options use Amazon’s cloud services as the target. Support for additional clouds is on the to-do list, along with the ability to deploy appliances into a private cloud. The next thing you’ll need to do, if you haven’t already, is sign up for an Amazon Web Services account. Be advised that this will require a credit card for billing purposes. Signing up for an account is free, and you won’t be charged anything until you actually use the storage services (S3) or compute cloud (EC2). You’ll need to make note of your Amazon Access Key ID and Secret Access Key during the registration process to enter into the TurnKey Linux Hub management page.

Backup and migration
TurnKey Linux Backup and Migration (TKLBAM) is one of the two services currently managed through the TurnKey Hub. TKLBAM will back up any TurnKey appliance installed either on Amazon’s EC2 service or any other system. It will use Amazon’s S3 service to store backup images or any other target supported by Duplicity, including the local file system, NFS, RSYNC, SSH, FTP, WebDAV and even IMAP. To get started with TKLBAM, you’ll need to sign up for an Amazon S3 account as shown below. 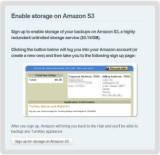 Once that’s accomplished, you’ll have the option to install the TKLBAM client on any Linux installation, physical or virtual. The instructions and options are shown on the resulting page: 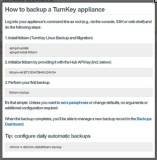 At this point, it's important to take note that the TKLBAM toolset works on both physical and virtual machines. This makes it a great tool for system migration, both in the physical-to-physical the physical-to-virtual sense. Another key takeaway here is cost. Amazon S3 storage is really cheap. With a basic price of 15 cents per gigabyte, you can store lots of full images for pennies a month.

Appliance management
Deploying a TurnKey Linux appliance to Amazon's EC2 is very simple. Clicking on the Launch TurnKey appliance link presents a dialog box for you to complete, similar to the image below.

You'll want to generate an SSH key pair to simplify connecting to your server in the future. This is done by clicking on the plus sign next to the SSH key-pair line. The TurnKey deployment page provides helpful popup screens to explain the different options when you're deploying your appliance, as shown below.

Once you have the appliance configured and click on the launch button, you should see it in your admin dashboard, as in this screenshot:

The dashboard gives you direct control over the life of the appliance through the Reboot and Terminate links. You can directly view the output of the system console should you need to see something specific. Finally, there’s a handy link labeled “Launch a new server like this one” to simply create an exact duplicate of the appliance instance should you wish to do something like configure a production and test server that are identical.

Conclusion
The TurnKey Linux Hub adds a whole new dimension of control to TurnKey's existing set of Linux appliances. An AJAX-based console provides a well-laid out surface to do everything necessary to manage your appliance instances. TKLBAM adds automated backup to complement the deployment and management story for a complete solution. While the service is still in beta, for anyone considering Amazon's EC2 service and virtual appliances, it's definitely worth taking a look.