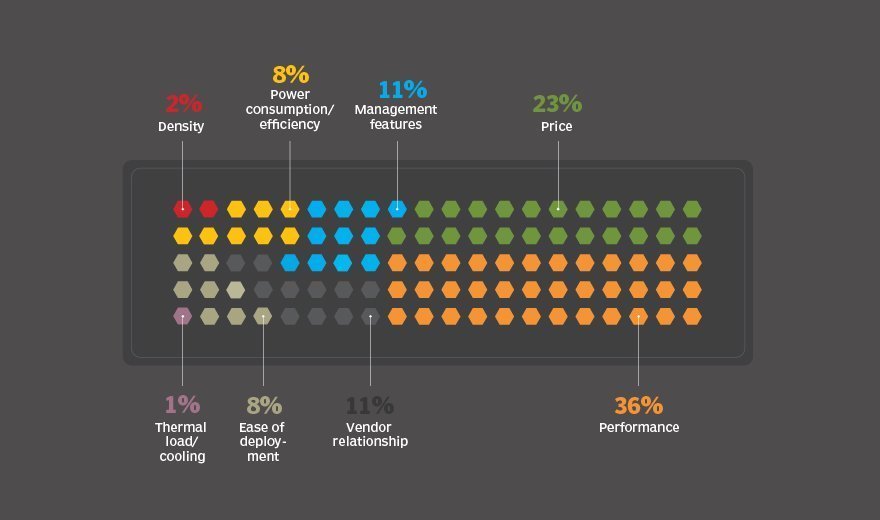 Server blades pack a lot of computing performance into a chassis, which means a lot of wasted heat. But data centers that buy blade server technology care more about performance than density.

Respondents to the TechTarget Server Hardware survey ranked performance and price as the top two considerations when buying server blades and chassis, at 36% and 23%, respectively. Blade server buyers took little interest in the density provided by the technology (2%), the thermal load that tightly packed server blades create (1%) or the power consumption and efficiency ratings of systems (8%).

Blade servers offered the consolidation ratios that rack servers did not, said Jamie Rabenstein, IT manager at Victor Community Support Services (VCSS), an agency that delivers mental health and family support services, based in Chico, California. The switch to blade servers was "different" from a provisioning standpoint, Rabenstein said, "but it's all Intel underneath." The payoff is in the automation running in the background, where, if IT gets the policies and procedures right, it's like a vSphere hypervisor for hardware blades, he added.

While it might not be a main motivator for data center procurement decisions, the density is nice when you just don't have room to bolt on any more racks. VCSS fit a Cisco UCS platform with eight server blades in the space that two Dell servers previously occupied.

Learn more about blade server buying decisions, and what other technologies blade shoppers are considering, from the blade server infographic. Go to the next slide to see what's most important when buying software-defined network components.