This content is part of the Essential Guide: Need-to-know IT job requirements
By

New technology and increasing pay premiums for IT skills keep the revolving door of IT positions constantly turning -- and this year, far more jobs went to women in information technology.

Women filled over 60% of new technology jobs in 2013, according to data from the U.S. Bureau of Labor Statistics, provided by Dice Holdings Inc., a career site for technology and engineering professionals based in Urbandale, Iowa. In 2012, women filled only about 35% of new tech jobs.

It's too soon to know, and a few months isn't a definite trend, but companies have been actively pursuing diversity programs for a while, and this is really the first sign it might be paying off.

Despite the positive numbers, IT industry watchers hesitate to call the gender gap in IT closed.

"While I'm cautiously pleased at the uptick in tech hires this year ... one year's anomalous result doesn't necessarily reverse the trend demonstrated by the other nine years of data," said Rachel Chalmers, who has had a long career in the IT industry. "Give me 10 years of something closer to equity and [I] might [not] be so cautious."

However, Dice is optimistic over what this data could mean for future IT careers for women.

"It's too soon to know, and a few months isn't a definite trend, but companies have been actively pursuing diversity programs for a while, and this is really the first sign it might be paying off," said Shravan Goli, president of Dice."With a low unemployment rate and a variety of career options, women and men are more aware of the benefits of a STEM [science, technology, engineering and math]-related career."

Technology is one of the stronger fields in the job market, and more women in IT is an inevitable trend.

But getting hired for these IT positions is just the beginning -- the glass ceiling remains, Chalmers said.

"Lots of women get hired into tech and lots of [them] are extremely technical, intelligent and able," Chalmers said. "Fast forward to what's often considered the best job in the industry -- founder of a well-funded startup -- and where are the women?" 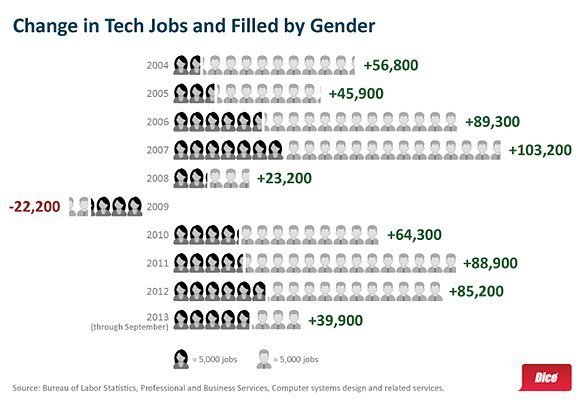 "Of the hundred-odd startups that have pitched me since I joined a [venture capital] firm, exactly one was led by a woman," Chalmers said. "This ratio is well-documented and pretty representative. The situation is changing, but a huge gap remains."

Meanwhile, women who choose to make a career in the technology world are usually on the same level as their male counterparts in terms of education, job experience and job title. That means "nothing should hold them back," Goli said.

"They shouldn't worry about keeping up with their male counterparts, but making sure they're being heard, valued and [are] asking for what they want," Goli said. "There are several examples of women holding key positions and rising through the levels, and it's important for them to learn from these role models [when building] their own careers."

Across the board, the STEM field's unemployment rate is almost half of the national average.

Software development has gained the most steam in the job market.

"They've had the lowest average unemployment rate since 2000, and employers are still looking for this talent," Goli said. "The closer to the application level of the technology stack tech pros are, the better chance they have at getting [a pay raise] and seeing strong demand from companies for their services."

There's also job growth in a category the government calls data processing and hosting, which is where the cloud service providers report, Goli added.

In addition to those job trends, Foote Partners LLC, an independent IT research and advisory firm in Vero Beach, Fla., released its IT Skills Demand and Pay Trends Report for the fourth quarter of 2013, detailing the increasing pay premiums for IT certifications and noncertified IT skills.

Compensation for IT certifications rose 1.5% in the third quarter of 2013, the largest quarterly gain since 2005 and the first time since 2006 that there have been two consecutive quarters of positive growth in pay for certifications, according to its report.

Average pay for noncertified IT skills increased slightly in the third quarter (by 0.4%), a seventh consecutive quarter of positive growth. Overall, noncertified skills pay increased in 29 of the past 36 quarters and is up 1.8% in the past 12 months.

Big data analytics came is as the highest-paying noncertified IT skill of those surveyed from July 1 to October 1, according to the report. Prescriptive analytics, data governance, data architecture, infrastructure architecture and IT governance skills also topped the list.

U.S. employment numbers for October 2013 released by the Bureau of Labor Statistics revealed a net gain of 10,400 jobs across four industry job segments commonly associated with IT professionals. This was the largest monthly gain in three months.

The two segments that have been responsible for between 90% and 100% of the monthly IT-related job gains are management and technical consulting, and computer systems design and related services, according to the report. Together, they added 10,400 jobs to U.S. payrolls. The number is slightly higher than the 2013 monthly average of 10,250 jobs for the same segments, and more than August's and September's gains of 6,600 and 3,500 jobs, respectively.

The telecommunications and data processing segment and the hosting and related services segment together posted net job losses of 500 jobs, 2,000 fewer lost than the previous month, but well off the average of 1,750 new jobs added per month in 2013.

Ben Rubenstein - 3 Dec 2013 12:28 PM
Hi Talula, the article seems to be loading ok for me. What does the URL say when you load the page? It might include some anchor jumping you down to the comments for some reason.