Two new data center metrics from The Green Grid may help data centers track their carbon emissions and water use and compare and contrast their results.

The CUE metric will measure the greenhouse gas emissions generated by a data center, although most data center managers are not concerned with measuring carbon emissions, at least not yet. At the Gartner Data Center Conference this week in Las Vegas, an IT director from Winnipeg, Manitoba, said his utility mix is 100% hydropower and dirt cheap, and tracking carbon emissions is “four to five years away.”

WUE = Total water used by the facility divided by IT load

Another data center manager from frigid Fargo, N.D., said it’s hard to talk about global warming with two feet of snow on the ground.  “This is America and we don’t care about carbon emissions,” he joked, while acknowledging that his company’s energy mix is mainly coal-fire based.

Despite lackluster interest from many in the IT community, Christian Belady, Green Grid board member and an IT architect with Microsoft, said most large organizations in the Global 1000 already report carbon emissions in the European Union, and the EPA is interested in the CUE metric as well.

While CUE is interesting for calculating emissions for existing sites, it may be even more important in site selection criteria for new data centers

PUE is calculated by dividing the amount of power entering a data center by the power used to run the computer infrastructure within it. 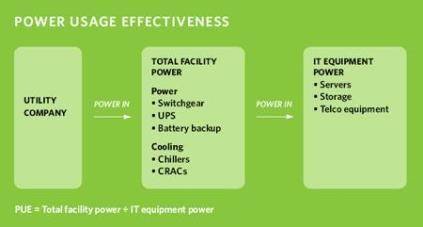 PUE is therefore expressed as a ratio, with overall efficiency improving as the quotient decreases toward 1. An average PUE, where the data center cooling and backup power are eating up as much or more power than the servers, may be between 2 and 2.5.

To find your Carbon Emissions Factor (CEF), Belady recommends checking in with the U.S. Energy Information Administration's tools for voluntary carbon reporting analysis, which can provide a CEF by region. The carbon emission factors vary dramatically based on the utility mix in each area. For example, the highest CEF went to the Rocky Mountain Region (CO, UT, NV, WY, MT), with a CEF of .909, and the lowest CEF was in the Columbia River corridor (OR, WA, ID), with a .147 CEF.

A data center in Oregon with a 1.5 PUE has a CUE of around .220, whereas a Nevada data center operating at 2.5 PUE may have CUE around 2.27. The closer you get to zero the better.

Belady admits that the data center industry hasn’t worked out all the bugs with CUE, but said that it was important to publish something and let people start kicking the tires.

“PUE has improved the efficiency of the industry,” Belady said. “CUE will go through the same kind of thing PUE went through. It’s going to create a competition. I’m waiting for the first person to come out and say my CUE is zero because I’m using hydropower. There are probably some facilities close to zero.”

Over time, colocation providers could use the CUE metric as a marketing tool to tout their environmental cred. Sarah Geiger, director of colocation services for New York-based Telx looked into certifications like the US Green Building Council’s LEED program and Energy Star for Data Centers, but said tracking carbon was two to three years away. “But as we design our larger facilities, we have the advantage of starting from scratch”

Whiskey is for drinking, water is for fighting
Detail on WUE are less fleshed out, but there is a consensus in the data center industry that water will be a scarce resource in the future. Since companies already measure water consumption, the new metric should not be hard to use.

The equation will likely look like this: WUE = Total water used by the facility divided by IT load.

Companies can choose specific equipment to improve their WUE. For example, using untreated outside air to cool servers instead of chillers or using gray water for cooling gear.

Again, Belady stressed the need to air the subject now. “If you lose time, it takes people longer to figure out how to focus the discussion,” Belady said. “Had we waited for PUE to be fully defined, we’d have waited four years, and as a result the whole industry wouldn’t have moved forward.”

What did you think of this feature? Write to SearchDataCenter.com's Matt Snsberry about your data center concerns at mstansberry@techtarget.com.