facing one aisle and hot-air exhausts facing the other. Over the past several years, it has become the de facto standard. But as server density has increased, efficiency gains have eroded.

Experts say that in a traditional hot-cold aisle design in a high-density data center, up to 40% of the cool air is wasted. Hot and cold air mix over the top of racks and around the rows.

Many data center pros have recently turned to air containment. Hot-aisle/cold-aisle containment systems started out as physical barriers that separate the hot- or cold-aisle airflow through makeshift design solutions like the vinyl plastic sheeting used in meat lockers or Plexiglas fit over the racks.

In this podcast, two of the biggest data center infrastructure providers square off, debating whether data centers should contain the hot or the cold aisle.

Is hot-aisle/cold-aisle containment a fit for every data center? Which factors weigh into the decision? What is the turnaround on return on investment for containment strategies?

Click on the thumbnail images for larger diagrams of air containment systems. 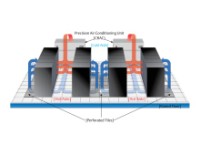 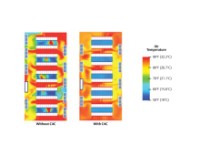 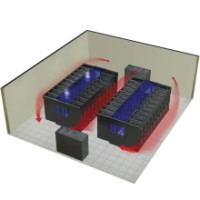 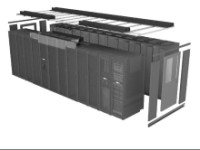 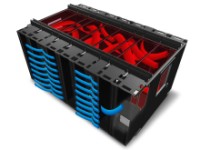 Carl Cotulli, vice president of products and services, WrightLine
Wrightline does hot-aisle, cold-aisle, or freestanding containment applications. We apply them judiciously based on the application, but if I was going to do a whiteboard project, I'd do heat containment. You want to get the heat out of the rack, don't let it escape -- use a return air plenum to get the hot air to a cooling device. Hot-aisle containment gives you the ability to integrate air-side economizing and can create more efficiency savings on the cooling side. We advise cold-aisle containment, specifically in retrofits where heat containment cannot be deployed.

Bob Seese, chief data center architect, Advanced Data Centers
We actually have a hybrid solution that has both the cold aisles and hot aisles enclosed. The cold aisle is the room itself (with no raised floor), while the hot aisle is a separate enclosure. Our goal is to separate the air streams to eliminate the temperature stratification that occurs in a typical environment.

We pressurize the cold aisle (only slightly, probably somewhere around .05 inches of pressure) and use 70-degree supply air, which results in 70- to 72-degree air at the equipment inlet. The equipment installs in traditional racks with blanking panels in any openings, and the racks back up to the hot-aisle enclosure. The enclosure has vertical blanking panels for any areas that do not have racks and blanking panels that extend across the tops of the racks for any racks that are shorter than the enclosure's customizable maximum height. The enclosures have been designed to minimize pressure drop so the server fans are not required to work harder and waste energy.

We then have a drop-ceiling plenum (cleanroom ceiling) at 15 feet that has exhaust fans for conditions that allow full economizer operation (about 75% of the year) and the ability to re-circulate the air back to the air handlers to provide mixed air for partial economizer times and full recirculation. We employ an atomizing humidifier in the return air stream for those few cold days a year when the humidity falls below the ASHRAE TC 9.9 standard. High humidity is not a problem in Sacramento, but if such a condition were to occur, we would close the economizer and go into full recirculation.

The whole system is operated by a series of mechanical dampers to control the air-side economizer, and the exhaust and re-circulated air and all the fans are operated on VFDs.

Of course, all the equipment in a data center will not work in this type of enclosure. For that we have designed the room to allow for 10% of the equipment to be outside the enclosure, and we have single hot-aisle enclosure cabinets as well.

What did you think of this feature? Write to SearchDataCenter.com's Matt Stansberry about your data center concerns at  mstansberry@techtarget.com.

How to use free cooling to benefit your data center

Water-cooled servers back with a vengance