How did they fix it? That depends on your definition of “Fix.” Quoth the patch notes,”If the authentication service is busy, the login checkbox will now wait at ‘Authenticating Credentials’ until a player’s login attempt can be processed. As a result, players should no longer encounter Error 37 when logging in.”

Gee thanks, Blizzard. Take away the fun part of server problems…

If you haven’t heard yet, Blizzard released its much-anticipated Diablo III mere hours ago. And it didn’t take long for a host of complaints about online gaming issues to come shortly thereafter.

Considering the current furor on another bumpy Blizzard release – remember the World of Warcraft issues back in 2004? – the question is: why hasn’t Blizzard gotten its act together?

Throughout its history, World of Warcraft had login and game server issues, as must be expected for a game supporting so many people. For the most part the problems were small and short. I sometimes wondered if Blizzard wasn’t building in server downtime to force its millions to go look at nature for a few minutes. There is an incredible amount of computer power needed to run a massively popular multiplayer online game. Blizzard eventually opened 10 data centers around the world to support its runaway hit.

Fast forward to 2012, Blizzard has three World of Warcraft expansions, a fourth on the way and tons of data to farm for server load information. You would think they’d have learned something from all their stress tests that launch day will always, always, always result in more server stress. That’s why, for so many Blizzard fans, Diablo III’s launch day server problems are simply unacceptable. Twitter has been abuzz with the error37 hashtag, which is one of the login errors players have encountered. The comments have ranged from snarky – “The world’s first coordinated DDOS attack on Blizzard not organized by Anonymous.” – to humorous – “I was going to play #Diablo3 tonight, but then I took an #error37 to the knee.” 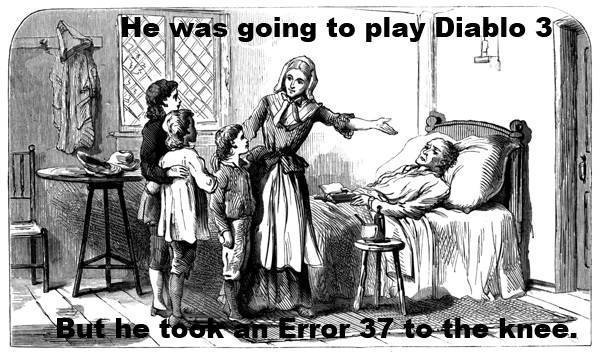 Joking aside, some Diablo fans, like Zynga’s Alex Levinson, wonder why this launch went off so poorly. In a blog post, Levinson talks about the sources of revenue for a game like Diablo III and how making customers happy at launch will generate interest later on and keep the game going. “This is why capacity planning for a launch like Diablo 3 should have had much more importance put on it,” he said. Levinson’s three tips for Blizzard: automatic scaling when demand is high, scaling written into application code and leveraging the cloud, like Zynga does, to help meet demand. Not bad advice there, Blizzard. Now you’ll have to excuse me while I power-level my Demon Hunter.